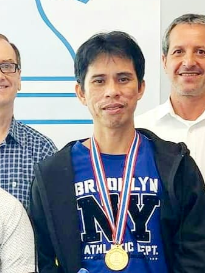 He tied with the same points with Portugalera Ric and Salvador Louie but won out with better tie breaks.

Portugalera Ric who was leading the tournament from the start and needed only a draw to become clear champion unfortunately lost in his final round versus Russian FM Makarov Nikolai Val.

Top seed FM Kulpruethanon Thanadon who had a loss versus Portugalera Ric had to settle for 5th place with a score of 6 and a half out of 9 points.

Malaysian Muzaffar Ahmad finished with 5 points placing him in 18th position. Some say he was aided by his lucky shirts but others say the opposite that he relied too much on the luckiness of his shirts. Either way a detail post mortem and further testing is required to determine which clothings were lucky and otherwise.

A total of 56 players took part in this tournament.